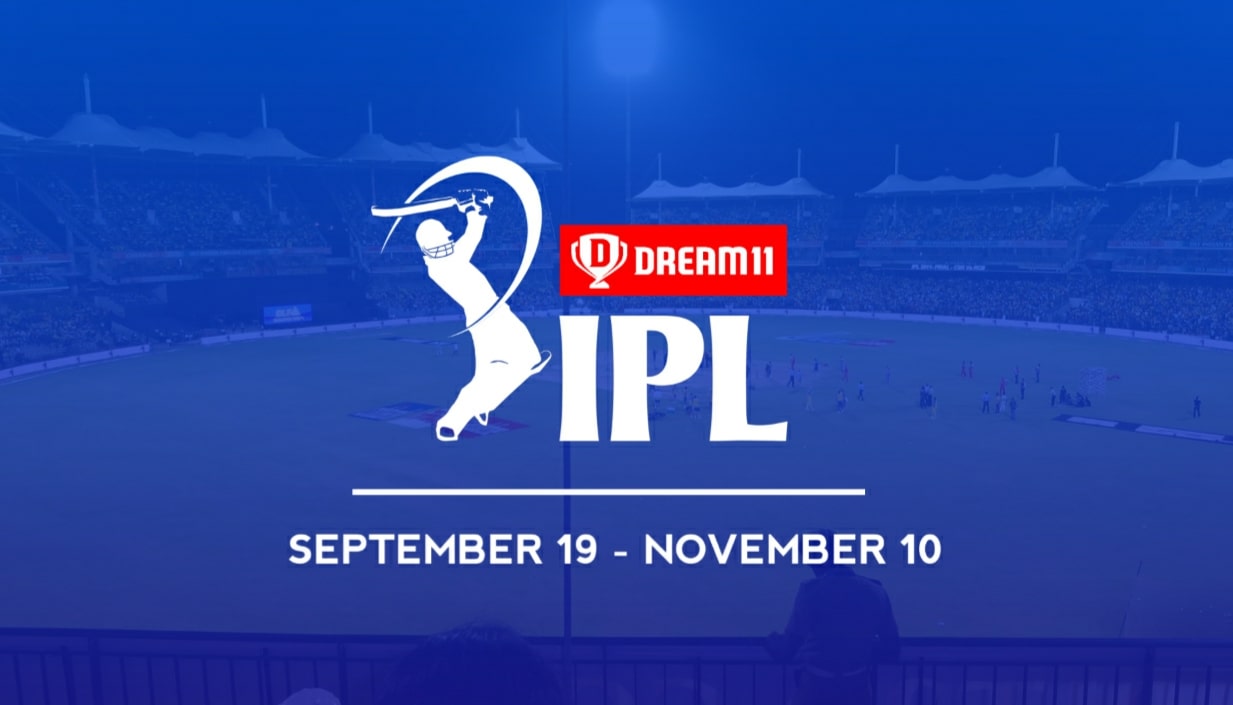 The cricket season is going on in India and we all are very busy watching the Indian Premier League (IPL). As we all know, India is one of those nations where cricket is celebrated just like a festival. Our emotions are attached to the game. If our favourite player scores good runs, we will become happy and if our favourite player doesn’t perform well enough, it makes us sad. IPL is celebrated as the Indian Cricket Festival. It entertains us for almost 2 months. Our favourite teams and players are playing against each other to win the title.

This year, the title sponsor of the Indian Premier League is Dream 11. Now, I know that most of you guys have already known about Dream 11. But in case if you have not then don’t worry, I will tell you. Dream 11 is basically a Fantasy Cricket platform where you can create your own dream team of 11 players and compete against different people across the globe.

Alongside Dream 11, there are other several companies who bid for the title sponsorship of IPL 2020. They are BYJU’S, TATA, Patanjali, Unacademy. But in the end, Dream 11 is up for sponsorship rights.

So ultimately, you are going to see the Dream 11 promotions everywhere whether through the advertisements of IPL or post-match awards (such as dream 11 game changer of the match). Now let’s talk about the main point. Is it okay to promote these fantasy apps?

No, it is completely not okay. Dream 11 is not the single fantasy cricket app out there. There are plenty of apps for playing fantasy cricket. These apps are doing a big scam to us. Now, you will say that common dude we can win money from these apps. Total rubbish! These apps are just stealing your money.

In this article, I will tell you how these fantasy cricket apps are doing a big scam to us. Without further ado, let’s get started.

The working principle of these apps is pretty simple. It doesn’t matter which fantasy cricket app you are using, the working is almost the same for all. Let’s take an example, suppose there is a match between two teams. Then at first, you have to choose your own dream team of 11 players (out of 22 players of both the teams combined) which includes batsmen, bowlers, all-rounders and a wicket-keeper. There are some conditions such as one wicket-keeper is a must in the team, there is a limit of choosing certain players from a single team. You are given certain points and your whole team should be created under those points. You can choose only four foreign players in your team. You have to choose a captain and vice-captain as well. The captain’s points will increase by 2x and vice captain’s by 1.5x.

In other words, every player has a pointer value of itself and you have to adjust all the players of your team under the particular points which you have offered.

Let’s understand this with an example. Suppose I have 110 points in my wallet and I have to create a dream team. The match is going on between Mumbai Indians and Royal Challengers Bangalore. So, My dream team is somewhat like this.

This team consists of 105.5 points out of 110. I hope you understand well now. After creating your team, you will be able to join different types of contests such as head to head contest, mega contests etc. Now, to join the contests, you have to invest some money at first. And if your team perform well and get listed in top positions (positions may vary according to different contests), then you will be awarded bigger price money. So, ultimately if you win the contest then you will be in profit. That’s the whole working process of these apps.

Q. Why These Apps are Not Available on the Play Store? 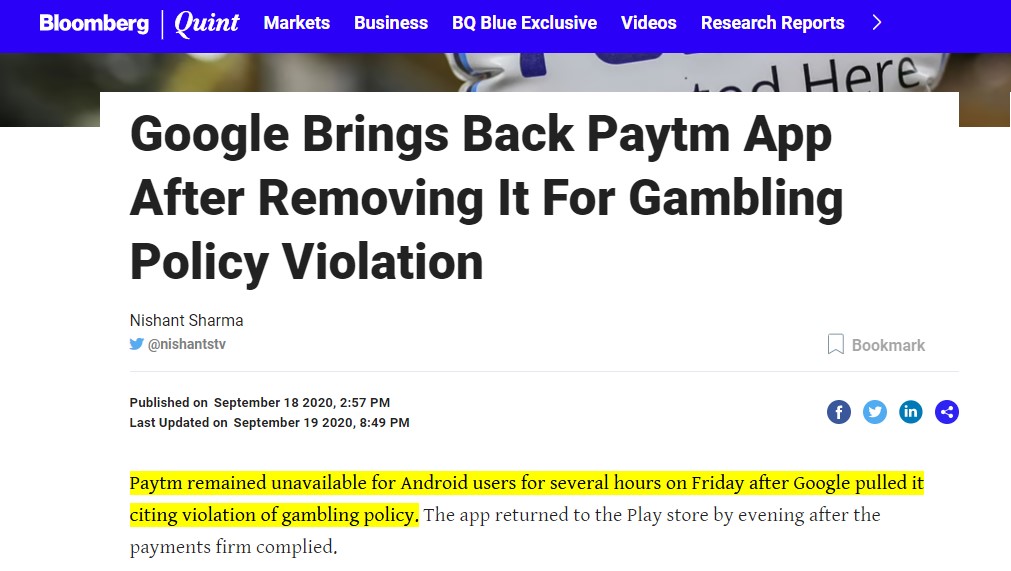 Google basically doesn’t promote activities such as Sports betting or Online gambling. You can read more about Google Play gambling policy from here.

Q. Why These Apps are So Popular Among Teenagers? 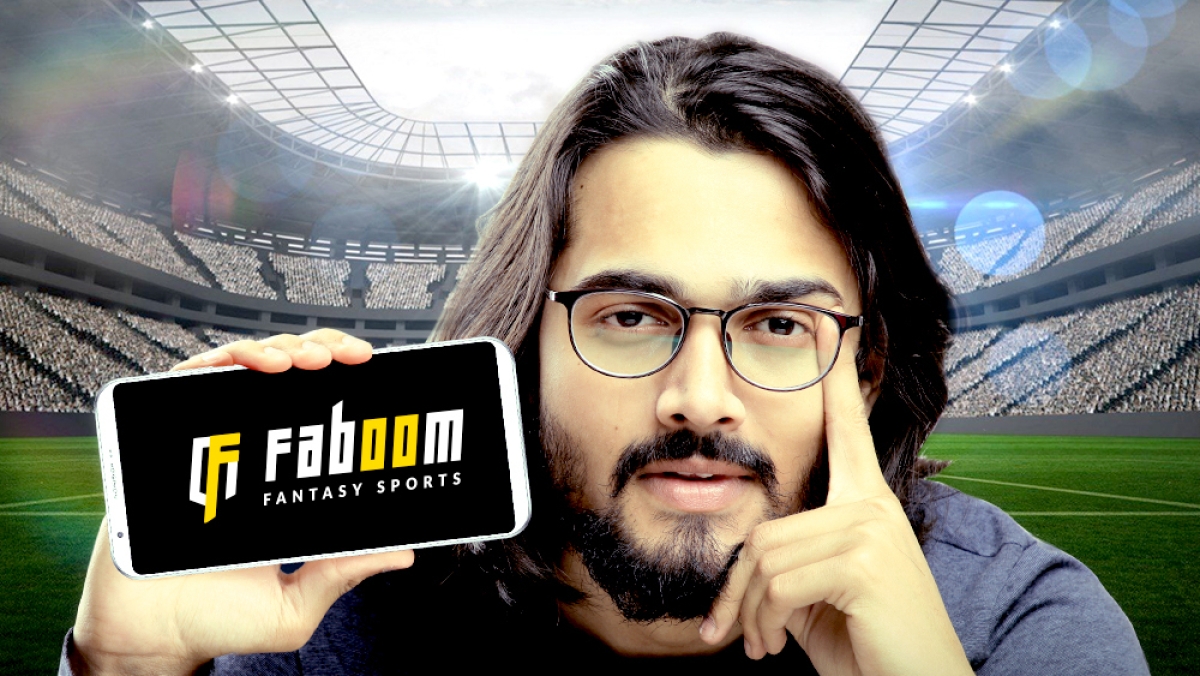 The only reason why these apps are so popular among teenagers in our country is the promotions and advertisements. The owners of the apps are so smart. Didn’t you notice that all of these apps are somewhere promoted by the famous cricketers? These include Virat Kohli, Sachin Tendulkar, MS Dhoni, Yuvraj Singh, KL Rahul, Virender Sehwag, Hardik Pandya and many more. And we are blindly following them. Even some of the famous Youtubers like Bhuvan Bam, Amit Bhadana etc are promoting these apps. They make catchy advertisements and promise that you will become a millionaire or something like that by playing these apps. These cricketers are paid with a heavy amount for these advertisements. Ultimately, they are playing with our mind. So, stop following your favourite cricketers blindly.

Q. How These Apps are doing Fraud and Stealing Our Money?

Here comes the main question that how these apps are doing fraud with us and stealing our money. I mentioned above the working of these apps and the working looks pretty simple. But it’s not that simple. The coding of these apps is done somehow that, when you use the app for the first time, you will end up winning some little amount of money. After that, you will slightly become addicted to it and would want to invest more money to win a big amount but that will not happen. Now, you will say that this is the game of luck. Well, it is true to some point but it is not completely true. I have my own personal experience with these apps. These apps will automatically push you downwards even if your team is performing better because of their rubbish algorithm.

Let me share my personal experience with Dream 11, last year I made two dream teams. The match is between Rajasthan Royals and Chennai Super Kings. I joined the same contest with my both teams in case if one team doesn’t perform well, the other one will do. And that happened too, my one team performs better and the other one performs very bad. So I am pretty happy because my team 1 (which performed better) was in top results and I was about to win the prize money. But what happened after the results is heartbreaking. My team 2 (which did not perform well) is selected and the other one is excluded and ultimately, I lost my money which I invested in the contest.

This case has happened not only with me but thousands of people out there. I am writing this after talking to plenty of my own friends and doing deep research. You people think that this is just a game and we should play it for entertainment. But do you ever sit and think that you are doing some kind of betting and gambling? Yes, you are doing it.

Let’s have a look at the market value of Dream 11 itself. Leave those other apps for now.

As you can see that it has a valuation of over 1 Billion Dollars in April 2019.  Now, it is even more. Also, it has more than 70 million active users which is an insane amount. It’s huge. The numbers speak by themselves that how much people are influenced by these types of apps.

Now, let’s have a look at some reviews and ratings of these apps which will clear all your doubts regarding fantasy cricket apps. 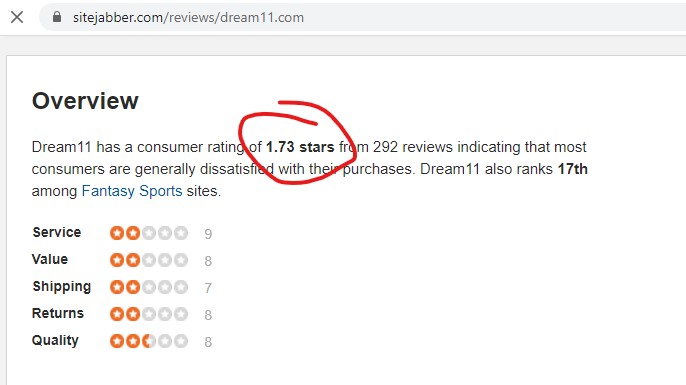 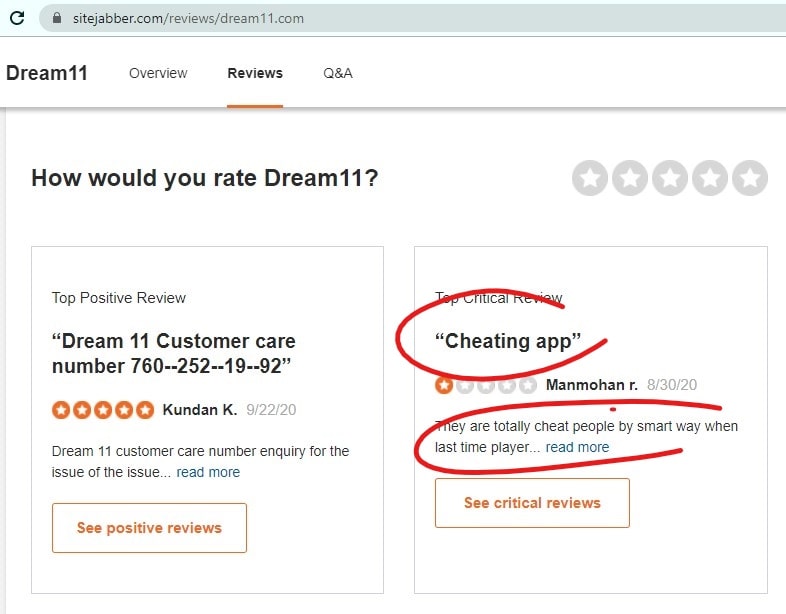 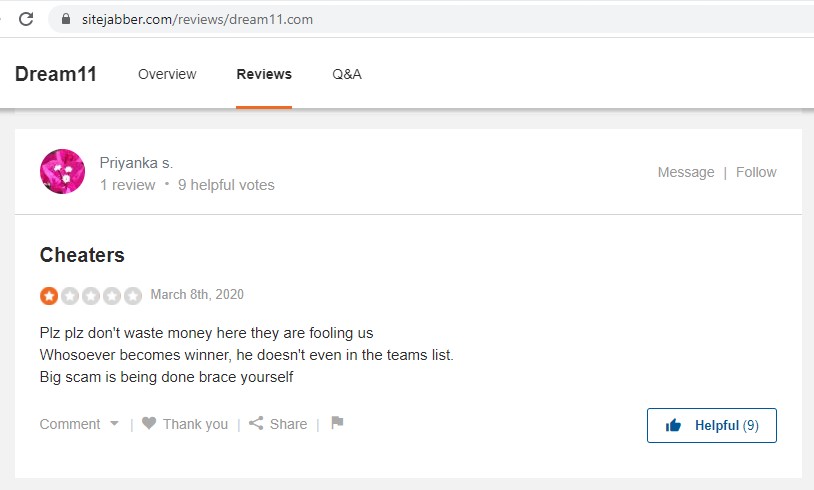 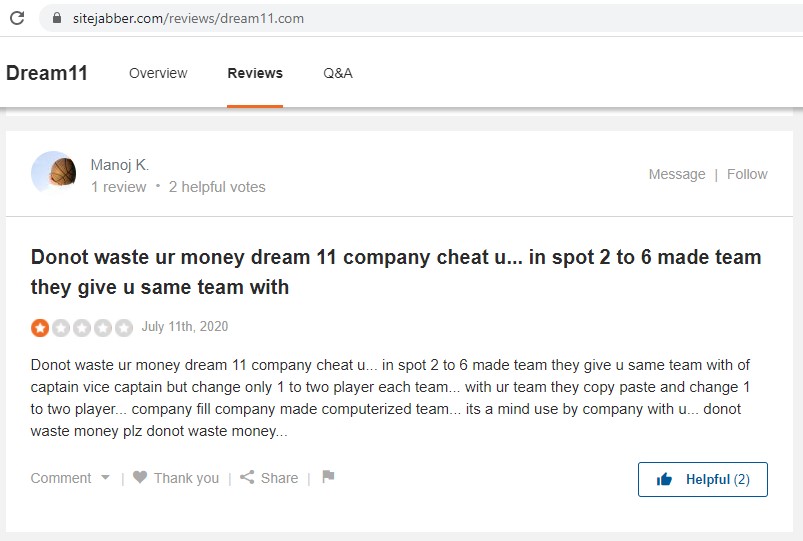 These reviews are a clear example that these apps are just taking your money off.

Let’s suppose for some time that these apps are not 100 per cent false but still, they are not good for us because we people are losing our money to them. And more importantly, these apps are promoting practices like online gambling and sports betting. I know most of the people use these apps are teenagers. So, is it justifying to lose the precious money of your parents in these rubbish apps? Ultimately, I urge you to immediately uninstall these fantasy cricket apps from your smartphone. Instead of that, do something usual which will be beneficial for you. I hope you are now aware of this Fantasy Cricket Scam.

That’s it for today. If you have any query related to the article then do let me know in the comment section below. I will surely get back to you. Share this article with your family and friends to aware them also. Have a great day! 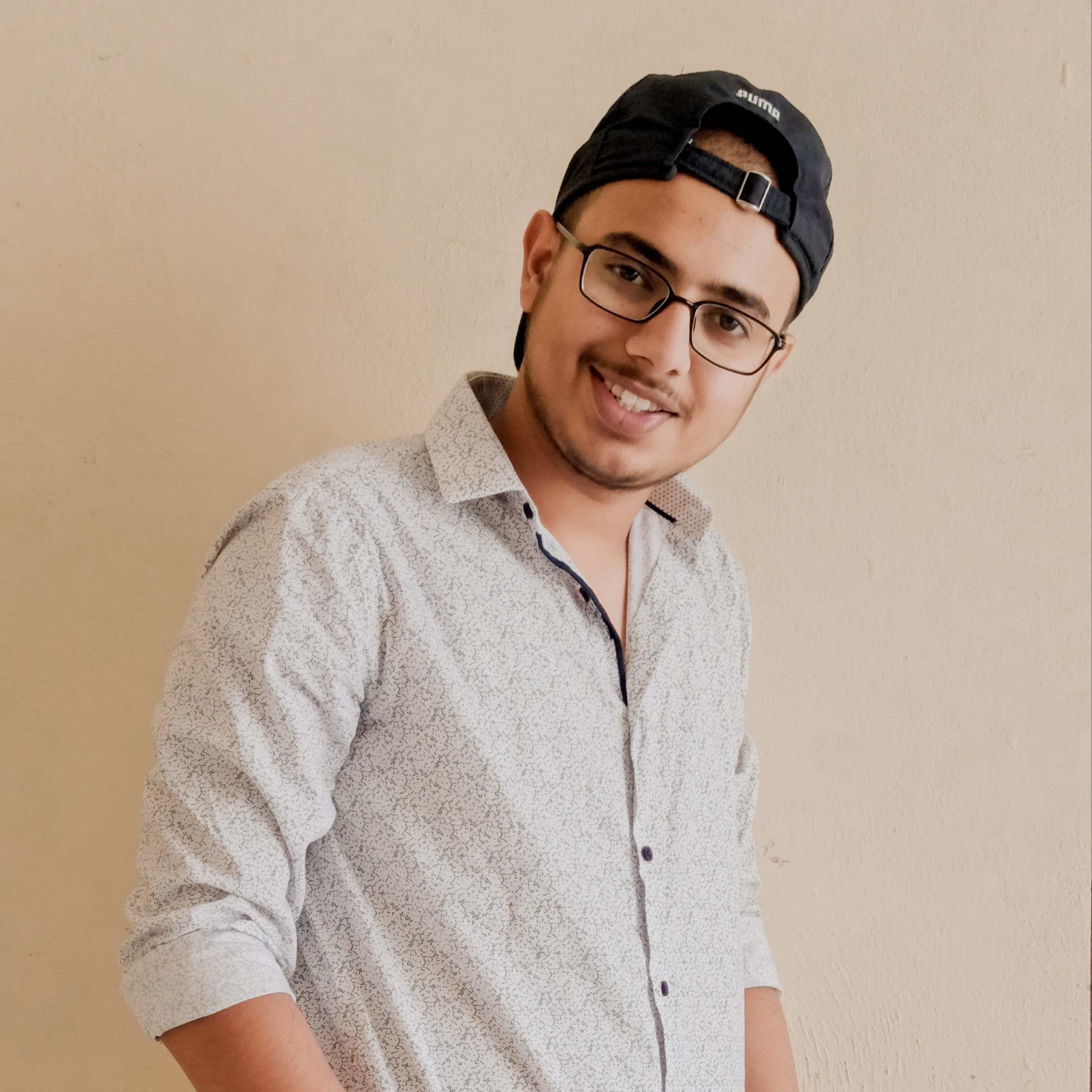 A Leo who loves to write about technology and gadgets. Apart from it, a crazy smartphone photographer.

Best Apps To Watch Movies For Free In 2020

3 Replies to Fantasy Cricket Scam – Beware of These Apps