Rs. 15,000 is the budget segment where specifications start to converge with the corresponding price. There is high demand and a parallel competition for higher stakes in this range. While the Chinese tech giants like Xiaomi and it’s rival Realme are playing a neck-to-neck game, companies like Samsung, Vivo and Oppo are sometimes overlooked and proven underwhelming; they are yet to penetrate their business into this price segment. Since there are lots of phone under Rs. 15,000, it can get staggering to choose a right one amongst them. In this list, we discuss smartphones that are actually suggestable- those which justify the price and offer stellar specifications. We present you the list of best smartphones under Rs. 15,000 in India.

Unlike Rs. 10,000 where your prime concern would be performance, Rs. 15,000 becomes a little broad. There are different things you should keep in mind before finalizing your way out. But don’t get fuzzy, they are simple. First thing you should resolve is the purpose of your purchase. Are you getting a phone for gaming? Or for media consumption? Or is it generic? Nevertheless, your primary focus should be on a worthy chipset descending with the good cameras, display and battery. If your prime concern is gaming, you should choose a phone with good processor and battery. If you consume media too much, you should go for a good display and battery (preferably Amoled). If it is photography, then a good camera setup, and so on. However, all features should be in check with each other at the end.

Let’s dive into the list of smartphones we have. 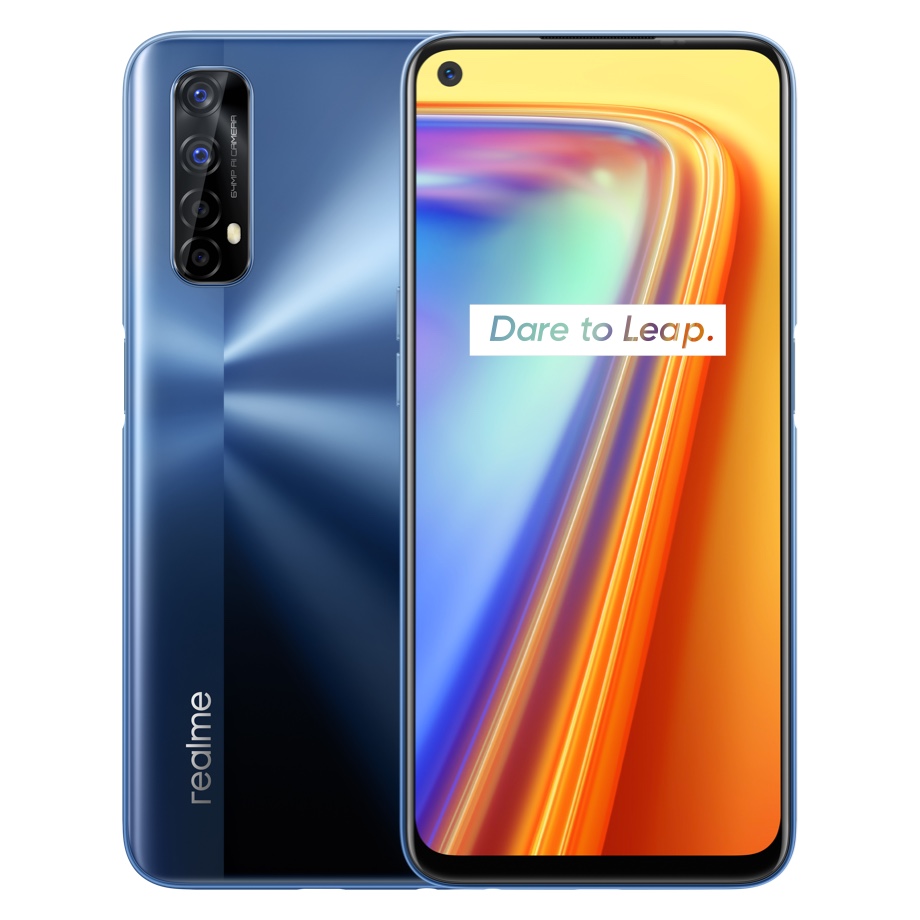 Realme unveiled their Realme-7 series lineup last week. Not to mention their take on specs, which is really competitive for the price-segment. Realme puts forward a strong combination of specifications that is slightly better from its competitors. It waves a good chipset, decent screen and a powerful battery within.

Realme 7 features the Helio G95 Gaming Processor which is strong in its own base and a good competitor to Snapdragon 720G. It promises an improved gaming performance, better video streaming and a faster network compatibility. In fact, Realme 7 is the first phone to feature Helio G95 chipset. Similarly, it offers an improved 90Hz FHD+ LCD panel. It will definitely make noticeable differences while gaming, meanwhile, making overall experience more immersive. If you are wondering, Realme 7 does have Widevine L1 certification making it eligible to stream OTT contents with FHD+ resolution.

The other subdivision where Realme 7 really prospers is the camera segment. It accommodates a primary 64MP camera (Sony IMX 682), an 8MP ultra wide-angle lens, two 2MP portrait and macro lenses making it a quad camera array. The images preserve good amount of details, have natural tone to them and perform fairly good in low light competition. However, the selfies are just okay.

Talking about battery and charging, the phone is powered by a 5000mAh battery. It comes with a 30W Dart Charger which can charge your phone from 0 – 100% in just an hour. 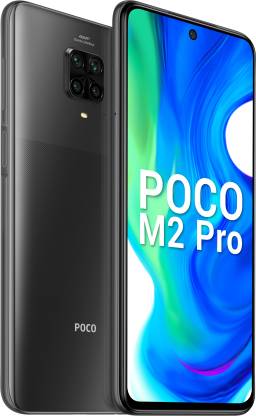 Poco M2 pro is the third phone from the sister-brand “Poco” of Xiaomi to debut in India. It made quite some buzz and was a subject of rant during its release for there was no creativity, effort and changes from the company that protruded the phone away from the crowd. Nonetheless, it offers an admirable specification and edges slightly above Redmi Note 9 Pro.

Poco M2 pro is powered by Snapdragon 720G chipset which is arguably the strongest contender in the market as of now. The front of the phone is a sheathing of 6.67″ FHD+ IPS LCD Display. Unlike its counterpart, it doesn’t have higher refresh rate. However, it does have Widevine L1 certification for HD content streaming.

Similarly, Poco M2 pro rapports to the Quad-camera club starring a 48MP primary camera, an 8MP ultrawide lens, a 2MP macro lens and another 2MP depth sensor. The camera performs reasonably good under ample lighting conditions. The images taken from selfie-camera are good as well. You can expect a decent camera performance from Poco M2 pro.

Likewise, the phone inhibits a 5000mAh battery which is certain to juice your phone all day. Charging is where Poco M2 pro deems slightly better than Redmi Note 9 Pro; it incorporates a 33W fast charger inside the box. With such massive batteries, charging time has always been a drag in mid-range phones. However, with Poco M2 pro, you can now charge your phone from 0-100% within just 1.5 hours which is quite commendable. 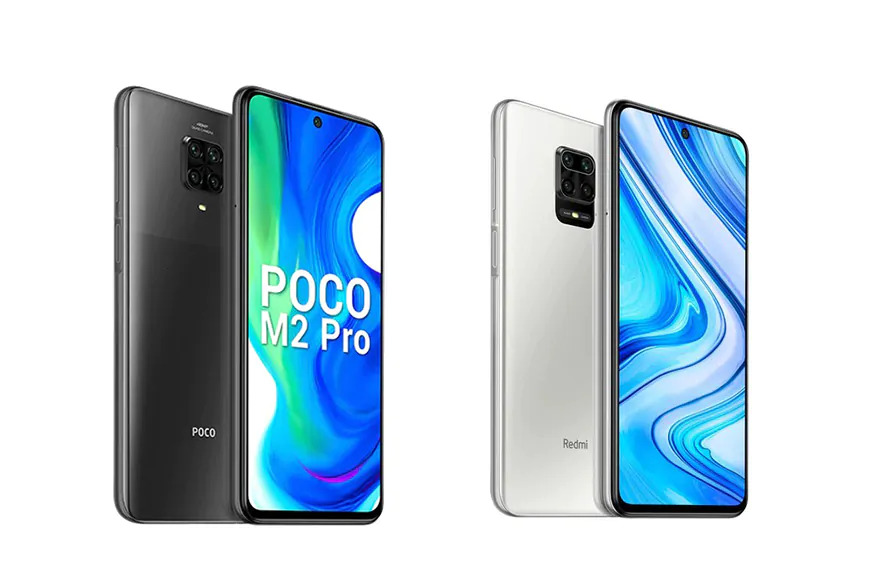 You are not alone to stuck between two exquisitely similar phones. If you are confused between which handset to go for, you should evaluate if the new changes are relevant to you. Both of the phones exhibit two distinctive design, I would suggest to go for one which you prefer.

They both have same Operating System. The ads have reduced ever since the petition started. Yet so, the app optimization is slightly better in MIUI for Redmi Note 9 Pro. If you fancy one brand over other, there is no problem opting out according to your precedence.

However, the main reason Poco M2 pro is in our list is because of that 33W fast charger that comes inclusive with the box. If you want a faster charging speed, it is highly recommended to go after Poco M2 pro. 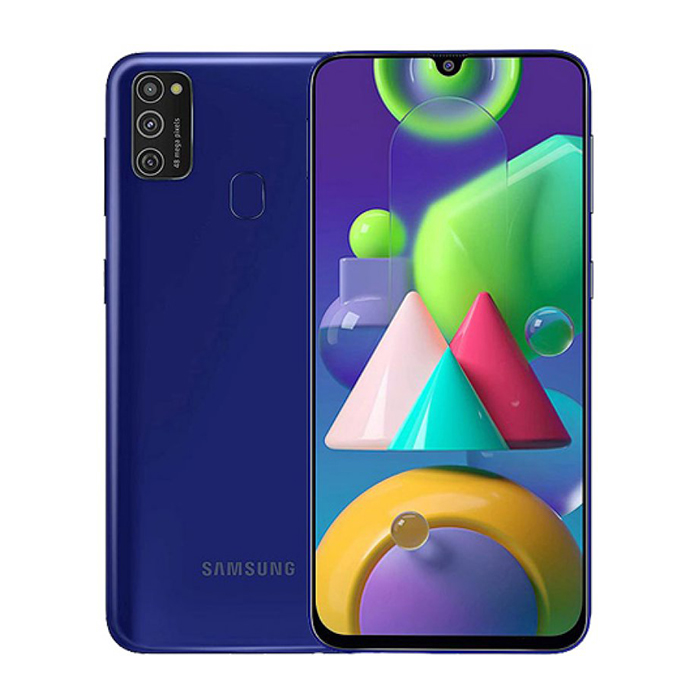 Samsung is the only non-Chinese phone to premiere in our list. While all the manufacturers in this budget-segment seem to compete in terms of processor and camera, the display wing is radically overlooked. Samsung has acknowledged the notion and pawned their scheme upon it.

Samsung Galaxy M21 is a faintly polished version of its predecessor M30s. It flaunts a 6.4-inch FHD+ super Amoled Display. The colors are crisp, the blacks and whites are punchy, and display is well lit. You can enjoy any FHD+ content as it warrants Widevine L1 certification. In addition, you get a mono speaker with a head phone jack for audio. With the integration of Dolby Atmos, you can relish both audio and video with this handset.

The performance of Galaxy M21 is mediocre and you can enjoy games at medium settings with their Exynos 9611 chipset. Meanwhile, it can handle multitasking pretty well. Likewise, the phone houses a triple camera layout at the rear end. The 48MP primary lens, an 8MP ultra-wide lens and a 5MP depth sensor can yield you pictures with good vibrant colors. At the same time, you can click decent selfies with it’s 20MP front camera.

The other main highlight of Samsung Galaxy M21 is it’s humongous 6,000mAh battery. In a normal day usage, it will help you run 1 and a half day easily. Having said that, the ravening part is it’s 15W charger which will take 3 long hours to juice the battery. 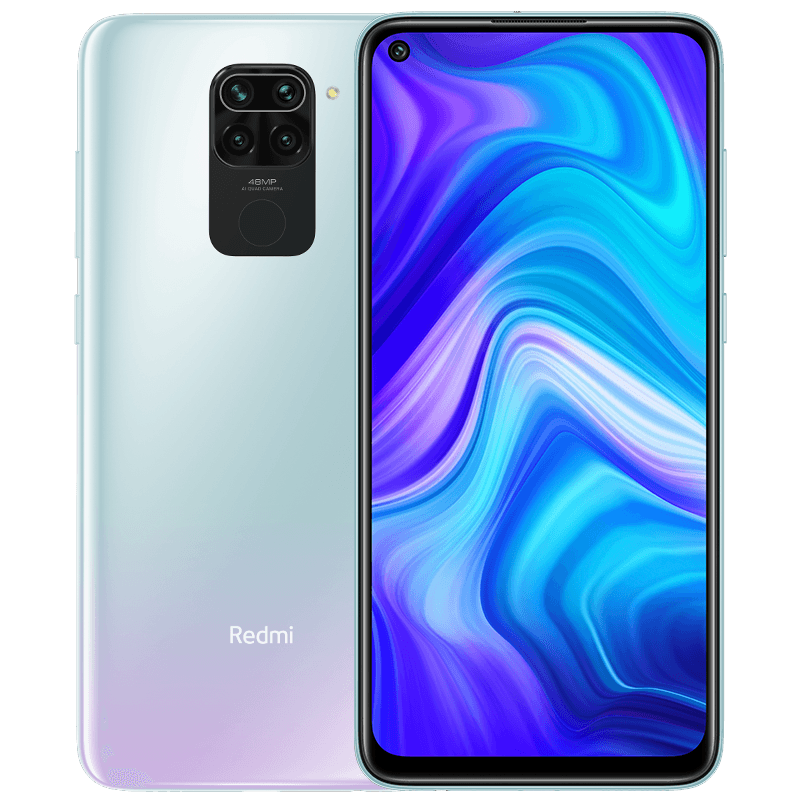 If you want a phone that is slightly inclined towards lower price segment, you wouldn’t go wrong with Redmi Note 9. It is a lite version of the flared-up Redmi Note 9 pro. It sets forth a basic set of features, nothing fancy, which goes parallel with its price. Even so, it stands out of its respective competitors.

The phone features a MediaTek Helio G85 chipset. It has a 6.53-inch FHD+ display with a punch-hole design. It billets the same quad camera setup that we discussed in Redmi Note 9 Pro. All other features that Redmi Note 9 assimilates are same apart from the build quality which is plastic, the MediaTek’s chipset and 13MP front camera. Briefly, it cuts corners to justify its price. Howbeit, Redmi Note 9 is still a good phone to consider. 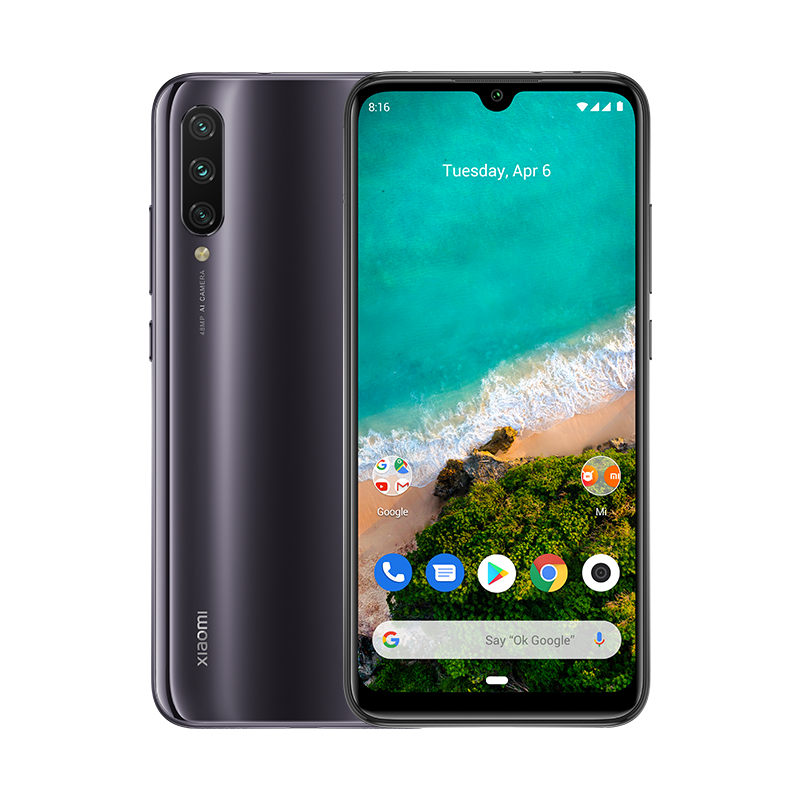 With respect to all other phones, this position is dedicated to people who prefer stock android. There are very few phones that offer pure android experience in this price segment. With this list, Mi A3 becomes the last phone from Xiaomi’s A-series to make the list since it is to be discontinued.

I would suggest you to go after Mi A3 for it is better in all aspects from Nokia 5.3. However, if you want a bit longer software support then Nokia 5.3 would be better option since it was released late. The phones feature Snapdragon 665 chipset, both running on Android 10. The specifications are given below. 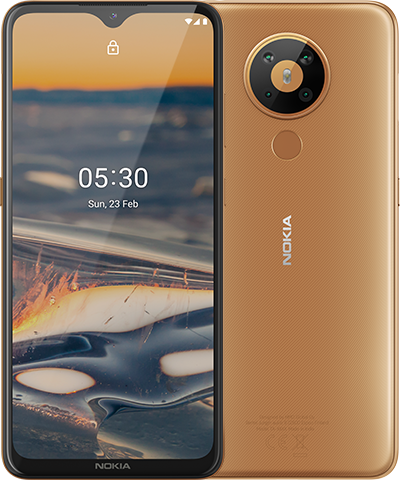 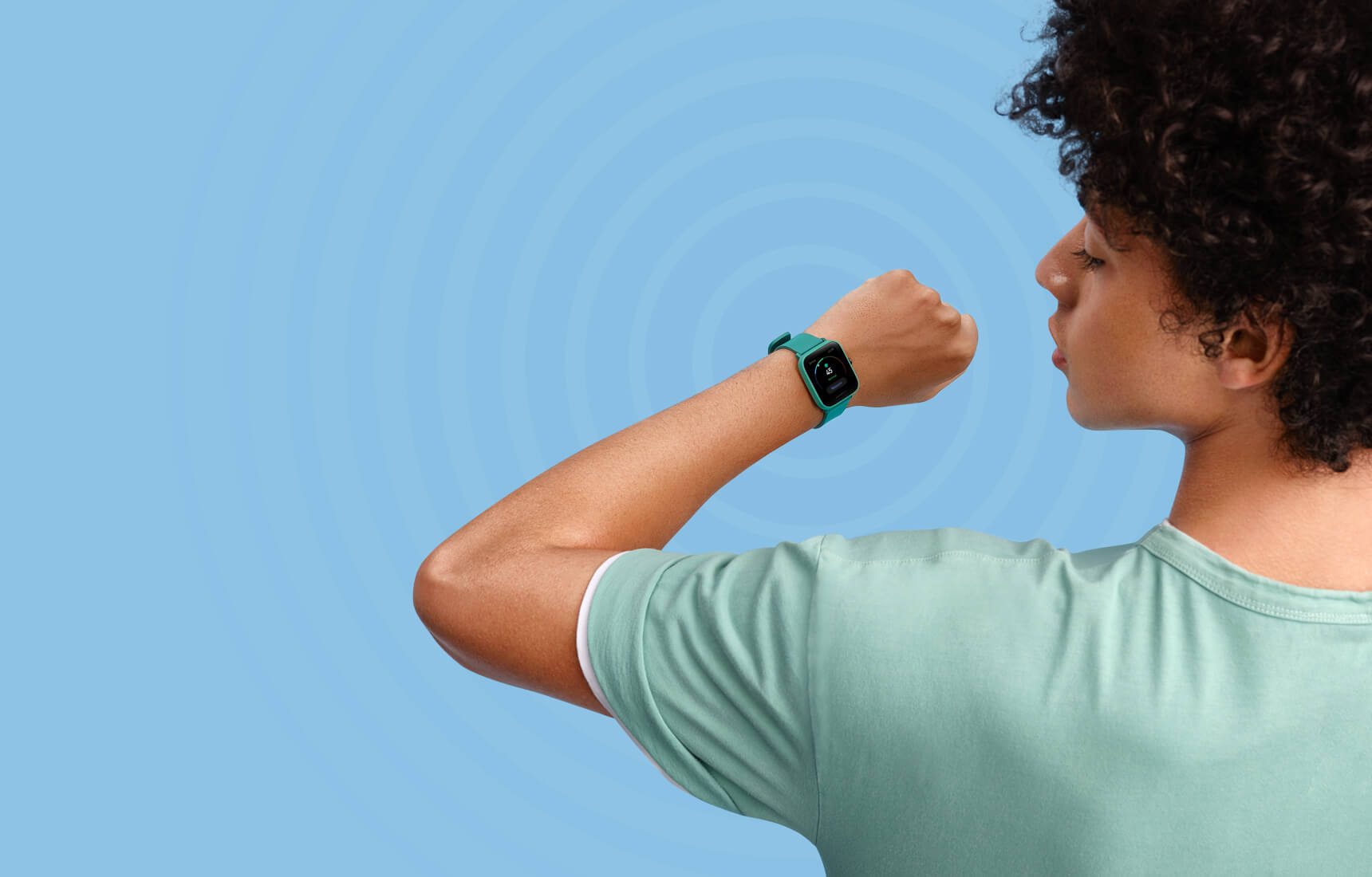 Best Budget Smartwatches to Buy in 2021 [Value for Money]