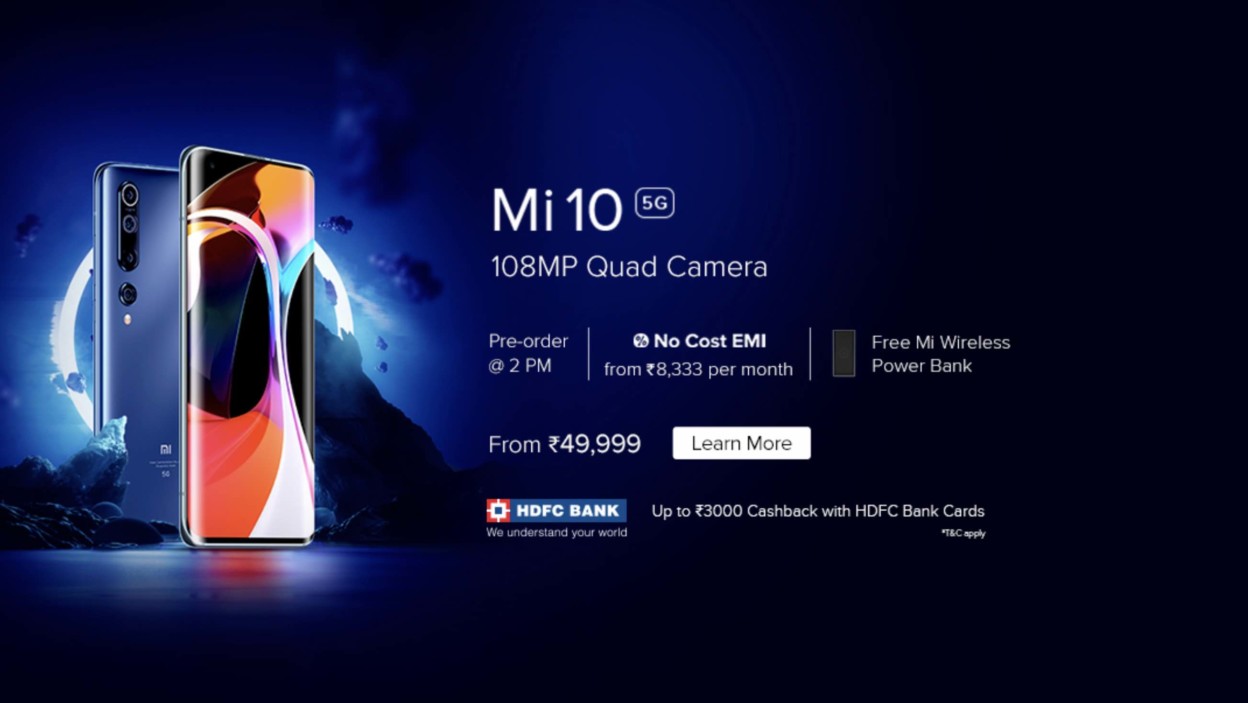 Finally, Xiaomi had an official launch of their Flagship Mi 10 in India along with their essential gadgets. Xiaomi Mi 10 series is a flagship offering smartphone in a relatively mid-range budget. Alongside Mi 10, the Chinese Company also announced Mi Box and Mi Wireless Earphones 2.

To keep in mind, Mi 10 pro has not been launched in India, at least not yet. Here is a detailed specifications of Mi 10 alongside Mi 10 pro for comparision.

The design of Mi 10 series looks really good. Xiaomi has gone with a frosted-matte type of design at the back. Design, somehow resembles to their own Mi 9 but with an upgrade.

The front and back of the phone are mildly curved at the edges and round at the corners. It is believed to provide a more compact and grippy feeling. Even though the phone is 9.4mm thick, this curvy design makes the phone appear a little less thin than it is.

At the front, Xiaomi has now gone with a 6.7-inch punch-hole display that runs curve at the sideways. The punch-hole design, as the naming trend, is assigned DotDisplay.

At the back, Mi 10 has 3+1 vertical camera design. The camera layout is placed at top left corner. The camera has bumps to them and do not lay flat on the surface.

Both versions of the Mi 10 series have the same 6.67-inch Amoled display with curvatures that subtly matches the symmetrical curve-edges of the phone.

The display is 90Hz Amoled with 2340×1080 HDR 10+ resolution. It is said to be 1200nits at peak brightness with P3 color gamut for better color reproduction. Also, touch sampling is 180HZ to give user the better experience with their 90HZ screen. The display, specs wise, seems to be good and updated along the market.

One of the major hypes of Mi 10 pro is its camera. Both the standard and pro version have whooping 108mp primary sensor. While the primary sensor is same in both the phones, they share different stories.

The shortest way to explain is:

Both of the phones have a 20MP front camera for selfies, under TinyDot punch-hole at the front.

The camera on Mi 10 pro seems to be more practical and a legit kicker to be honest.

Xiaomi has installed the top-end Snapdragon 865 CPU on their flagship Mi 10. The processor is accompanied by 8GB LPDDR5 RAM. We can expect any top-tier performance with this combo. Moreover, the phone has Vapor Chamber for liquid cooling, which cover 300mm2 area for heat dissipation.

Mi 10 users can opt up to 256GB of maximum storage. The flash storage is UFS 3.0 for better speed.

The phone runs on latest MIUI 11 on top of Android 10.

With the new Snapdragon 865, 5G has been default for smartphones. Thus, Mi 10 series supports 5G enabled sims. Moreover, the phone supports 2.4GHz WiFi + 5GHz WiFi + 4G/5G simultaneous connections to up to 3 networks in order to ensure stable and uninterrupted connectivity.

Mi 10 comes with 4780 MaH battery. This is really huge for any phone. Since it is a huge battery, it requires a lot of time to charge. But in order to reduce that, Xiaomi has added 30W charger in the box which can charge the phone from 0-100% is 65 minutes.

On the other hand, Mi 10 pro has relatively small 4500MaH battery. But it comes with a massive 65W charger, which charges the phone in only 45 minutes.

The charging port is industry standard USB type C. Also, both of the phones support wireless charging at 30W and have the added feature of reverse charging too.

In order to increase the audio-visual experience and add more spice to the entertainment, the company has gone with stereo speaker system. The Mi 10 series deliver balanced stereo speakers at the top and bottom of the phone with a 7-magnet speaker design. The experience is expected to be more immersive and fun.

Mi 10 with 108MP Camera and Snapdragon 865 announced in India

One Reply to Xiaomi Mi 10 vs Mi 10 Pro Specifications